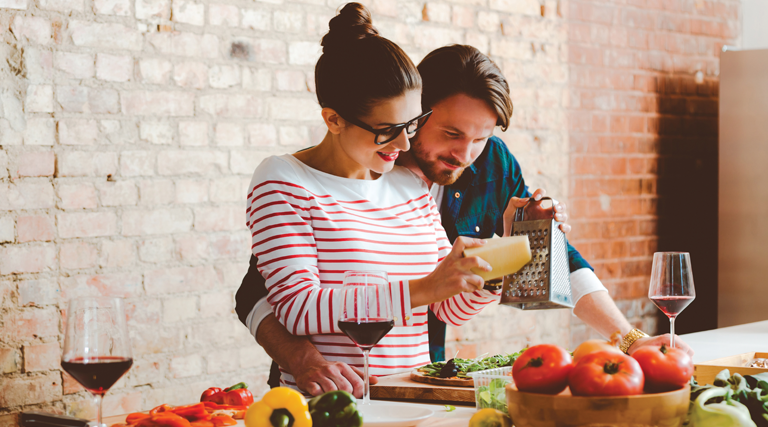 Are you that cook with a glass of wine in one hand who’s swinging around the kitchen to the groove of Miles Davis’ Kind of Blue? We’ve asked chefs and food lovers to ponder the perfect soundtrack for cooking and sharing a dinner dialed in for romance, and here’s what they say should be on any lovers’ playlist.

Amber Billingsley:
“Love Is the Drug” by Roxy Music
“Just try listening to that song and not get hot and bothered,” says Amber Billingsley, pastry chef for Stanza and Current Fish & Oyster of this Roxy Music earworm. “It’s my No. 1 pick of sexy songs to cook to … and it’s impossible not to dance to it.” A close second in Billingsley’s book: “Do You Love Me?” by Nick Cave and The Bad Seeds.

Sarah Day:
“Leave Me Alone” by Kaytranda
Don’t let the title of this track fool you, social-media influencer and big-time foodie Sara Day says. “This song brings us together in the kitchen. We love to dance and sip a nice cocktail while we’re cooking, and this song gets the creative juices going.”

Amy Leininger:
“The Rain Song” by Led Zeppelin
“I find the melody so sensual and absolutely beautiful,” says Amy Leininger, owner of The Ruin in Sugar House. “My husband plays the guitar and has played most every Zeppelin song for me. We spent many a night during the beginning of our relationship listening to Led Zeppelin. … Twenty-two years later, every time I play their music, my heart smiles.”

Evan Francois:
“Lovesick” by Banks
Harmons executive chef and Supper Club Salt Lake co-founder Evan Francois recommends Banks as talented artist in general, and this song in particular for its sexy and upbeat melody, saying, it’s “perfect for cooking a romantic meal for or with your significant other.”

Chelsea Nelson:
“48 Roses“ by Mariachi el Bronx
“Every time that my hubby and I are making Mexican food,” RitualAndCraft.com cocktail blogger and Devour contributor Chelsea Nelson says, “we listen to Mariachi el Bronx,” the musical alter ego of the LA punk band The Bronx. “It’s the best vibe for tortilla soup, kitchen dancing and romance.”

Chantelle Bourdeaux:
“Location” by Khalid
Chantelle Bourdeaux, regional sales director for A Priori Specialty Foods, recommends this ethereal and soulful vocalist, and I, too, am hooked. “Right now I’m still crushing on this artist,” Bourdeaux says. “Although young, new and just making his presence known on the music scene, his style feels familiar, fresh and always puts a smile on my face. I’m sure everyone around me is sick of it being on repeat, but I still can’t get enough of this sexy song!”

Rene Negron:
“I Want You (She’s So Heavy)” by The Beatles
Rene Negron, executive chef at the Cliff Dining Pub, equivocates that while it might not be a traditional love song, this tune sums up the “it’s complicated” relationship status. “To that special someone,” Negron says, this classic Beatles musical rollercoaster “will leave them pondering if you’re wanting them or that sake-miso-marinated cod. Something about the up and down progression of the song can just leave you in a tense romantic trance.”

Sara Lund:
“Bring It on Home to Me” by Sam Cooke
Bodega and The Rest owner Sara Lund says that Sam Cooke songs are a go-to at her casa, and a nostalgic favorite. “He’s got a good mix of slow jams and songs that are upbeat,” she says. “Bring It On Home To Me” is her hands-down favorite when she’s cooking with her sweetheart. “It’s perfect for smooching or doing a little jig in the kitchen.”

Heather L. King:
“U Got the Look” by Prince
Of this classic hip-shaking single, Devour contributor Heather L. King says, “My husband and I grew up in the ’80s and have fond memories of Prince—including one of our first concerts together. Sometimes our forays in the kitchen are a little heated due to opposite cooking styles, but Prince’s ‘U Got the Look’ always gets us dancing and laughing.” Her favorite part: Karaoke-style belting out Sheena Easton’s line: “You shonuf do be cookin’ in my book.” Quoting Prince, King says “After all, this is the dream we all dream of, boy versus girl in the World Series of love!”

Darby Doyle:
“Get It While You Can” by The Infamous Stringdusters
Like most people I talked with for this story, my kitchen streams a pretty eclectic mix throughout the day, especially since my husband and I have completely different tastes in music. One thing we agree on is nothing gets us going in the kitchen better than Bluegrass. For all of my family in Kentucky, cooking for someone shows how much you love them. So when I’m mixing up my hubby’s favorite cheese grits or a batch of biscuits, this song is a must-play. It’s impossible not to shake along to and sing the line “I like your biscuits in my gravy, ma’am.” Biscuits and gravy: more than a hearty breakfast on the morning of Feb. 15—they’re a declaration of love.