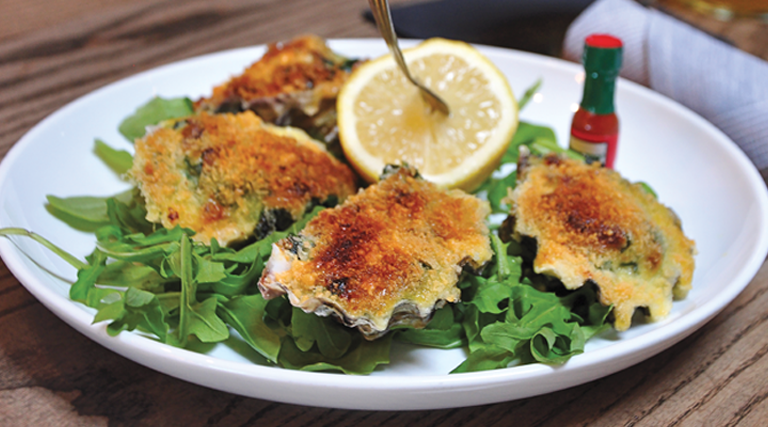 Oysters have a romantic reputation. Raw oysters are said to have aphrodisiac properties perfect for dreamy dinner celebrations—despite the scientific proof being less than definitive. Yet, desire and demand are powerful forces, and Utahns’ lust for briny shellfish is perhaps only outweighed by that of those with whom we enjoy them.
Budget-minded lovers can satisfy their oyster-on-the-half-shell cravings on Mondays with half-price deals at Under Current (279 E. 300 South, Salt Lake City, 801-574-2556, UndercurrentBar/com) and Market Street Oyster Bar (multiple locations, MarketStreetOysterBar.com). For those willing to splurge, we combed restaurants across the Wasatch Front and Back to discover our favorite oyster offerings (both raw and cooked). Now get slurping!

Oysters Rockefeller $16 pictured above
With Mardi Gras (Fat Tuesday) festivities on deck through Tuesday, Feb. 13, it seems only right to raise our glasses to the New Orleans’ creation of oysters Rockefeller as we celebrate this magnificent mollusk. White Horse Executive Chef Matt Crandall crafted his version to feature absinthe instead of Pernod for a pungent anise kick alongside house-smoked bacon—made from cured Snake River Farms Kurobuta pork belly. All these elements top fresh Taylor Shellfish Pacific oysters that are baked together with creamed spinach, hollandaise and a flourish of golden bread crumbs for a rich and creamy bite of the South. 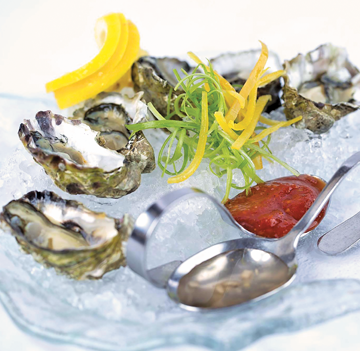 Oysters on the half shell $20
Take your pick of either East or West Coast oysters served raw or broiled on the half shell at this Park City culinary institution at the heart of historic Main Street. Co-owner and executive chef Seth Adams has carefully crafted two memorable oyster options: raw shellfish served with a house mignonette and a gorgeous candied citrus segment, or the Riverhorse Rockefeller selection featuring bacon and pimento cheese broiled to bubbly perfection. Paired with spectacular views of the ski slopes and a glass (or bottle) of bubbles from the impressive wine list, it’s sure to make your love smile. 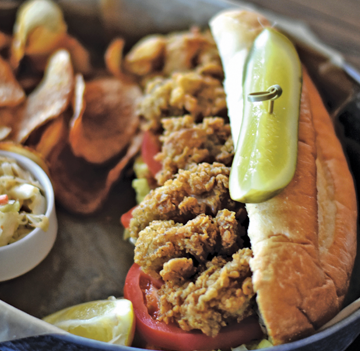 All-inclusive buffet featuring raw oysters & fried oyster po’boy $70
If having access to 60 dozen fresh-shucked raw oysters in one evening is your idea of romance, then Deer Valley’s seafood buffet is where you need to be. Head chef Ryan Estel says he and his staff begin shucking oysters about an hour before service six nights a week and constantly restock the iced oyster bar all evening. On busy nights, they’ve been known to shuck up to 1,200 Pacific oysters—ranging from Calm Cove and Hammersley to Eagle Rock and Church Point. But if raw oysters don’t make you swoon, try the occasionally offered po’boy with oysters soaked in buttermilk and Tabasco then rolled in panko and cornmeal and lightly fried. They’re served on a soft hoagie roll with a kicky Cajun rémoulade. 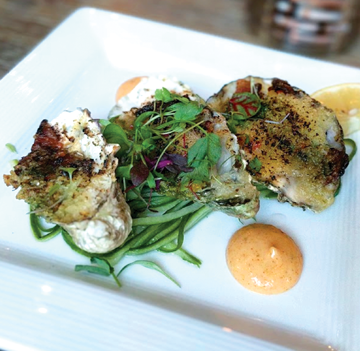 Baked oysters $10
Nestled at the heart of Sugar House’s ballooning commercial district, Kimi’s Chop & Oyster House resides in the beautifully restored post office building on Highland Drive. It’s the perfect atmosphere for couples to savor baked oysters, offered on the tapas menu. Whether enjoyed in the swanky lounge area or distinctive dining room, the plump mollusks are topped with applewood smoked bacon and herb butter plus diced sweet baby peppers for texture and freshness. Bread crumbs finish each oyster for a warm, delectable nibble. You can also mix and match raw oysters for $4 each, served with the housemade mignonette of the day.