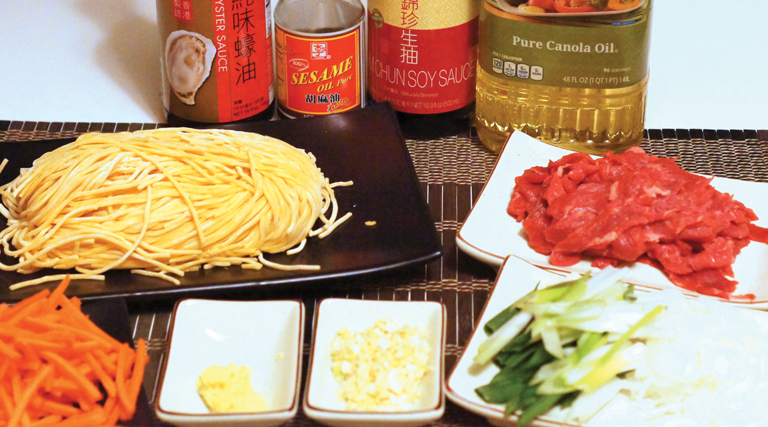 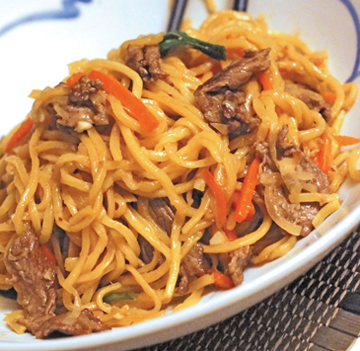 There are two stir-fry Asian noodle dishes that my family and I really love: yakisoba and lo mein. Chances are, you’ve had one or both at Japanese or Chinese restaurants. They are very similar.

Yakisoba, in Japanese, literally means “fried buckwheat,” but has come to more generally refer to a fried Japanese noodle dish made with soba (buckwheat) noodles and stir-fried with veggies and protein.

Similarly, lo mein means “stirred noodles” in Chinese and has come to refer to wheat flour noodles stir-fried with protein (typically pork) and vegetables such as carrots and cabbage.

I like both yakisoba and lo mein, but I sometimes find 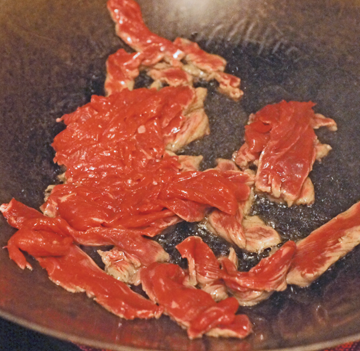 the former to be a bit cloying, especially when it’s overly sauced. On the other hand, lo mein can be a little bland. So, I’ve melded the two noodle dishes together to create one I especially enjoy. I’m calling it Yaki-Mein.

This recipe calls for beef, but you could easily substitute chicken, pork, tofu, shrimp or other proteins. Similarly, you could add veggies like shredded Napa cabbage, bok choy, broccoli, bean sprouts, snow peas and such. I just tried to keep the recipe simple here; feel free to expand on it and make it your own.

Note: The cooking of this dish is very rapid. The stir-frying usually take less than 5 minutes, so be sure you’ve got all of your ingredients prepped and ready 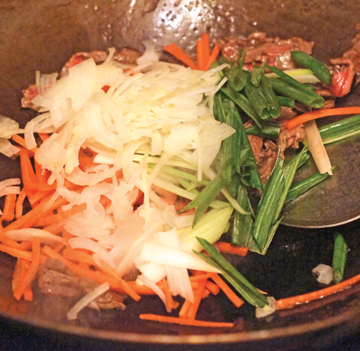 to go before you turn on the stove. 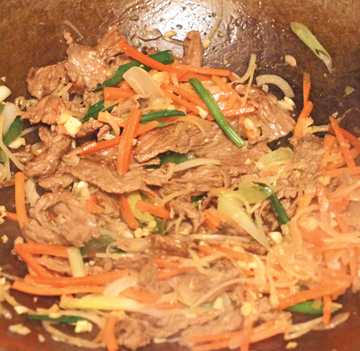 Method:
Begin by cooking the noodles in boiling water according to package directions—usually only 2-3 minutes.
Drain the noodles in a colander and toss with 1 or 2 tablespoons of sesame oil and set aside.
In a small bowl, combine the soy sauce, oyster sauce and white pepper.
In a wok or large, deep skillet, heat 1 tablespoon of cooking oil over medium-high heat.
When the oil begins to smoke slightly, add the beef, stirring continuously until it’s mostly browned.
Add the carrots, onions and scallions to the wok and continue stir-frying until the veggies soften a little.
Next, add the garlic and ginger to the wok and stir-fry another minute or so, but don’t burn the garlic!
Add the noodles and the bowl of sauce to the wok and stir-fry until well blended and warmed through, another 2-4 minutes.
I hope you enjoy my Yaki-Mein!