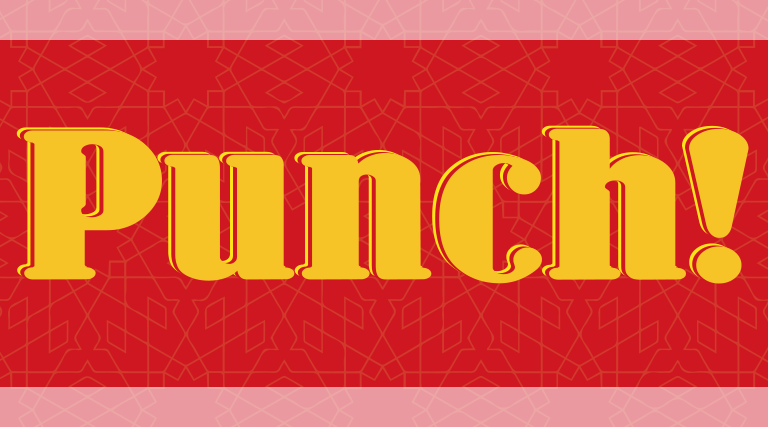 When thinking of celebratory imbibing, the classic cocktail has enjoyed quite a comeback in recent decades. But long before professional bartenders codified cocktail-making in the 19th century, much of the world’s inhabitants communally consumed their libations in the form of punch. From naval grog barrels aboard ships on all seven seas to Regency ballrooms and New England roadside taverns, flavoring and mixing distilled spirits with a bit of sweet, sour and a touch of spice was considered a proprietary point of pride. In fact, as drinks historian David Wondrich notes in his comprehensive study Punch: The Delights (and Dangers) of the Flowing Bowl, punch was so prevalent in the life of the greater British diaspora that if a curious reader “opens just about any volume written in English between the late 1600s and the mid 1800s that deals with the details of day-to-day life … odds are sooner or later, somebody’s going to brew up a bowl of the stuff.”

Real Punch (which Wondrich designates with a capital “P” to differentiate historical recipes from modern day fraternity bug juice served from a trash can) sometimes takes days to construct, with steps like making infusions, concentrating citrus oil sugars and laboriously straining and clarifying—all part of building the perfect Punch. Water Witch owner and bartender extraordinaire Scott Gardner is a huge fan of both the traditional methods and resulting potion. He explains that “Punch can have such complexity” of both technique and resulting flavor, but with minimum fuss when serving a crowd.

Unfortunately, many states (including Utah) do not allow serving punch to patrons by-the-glass for general bar and restaurant service since the alcohol content per drink isn’t metered. Fortunately for home-based punch-making, these arbitrary standards can be tossed out the window, making for some entertaining and delicious historic punch recipe resurrections. Just keep in mind that many old formulae do, indeed, pack quite a punch proof-wise. As Wondrich notes, “If the Punch is cold, the ice will melt as the [evening] drags on; if it’s hot, the alcohol will slowly steam out. Either way, it will weaken over time, in parallel with the drinker’s judgment. This is not a bad thing.”

Perhaps one of literature’s greatest proselytizers of Punch, Wondrich says Charles Dickens was “known among his friends for his ritualized performance as he worked up a bowl or jug [of Punch], complete with running commentary on his ingredients, techniques and progress.” Dickens generously shared his popular punches with friends far and near, including this recipe for a highbrow hot rum-and-cognac punch that he sent to an in-law, Amelia Austin Filloneau, in 1847.

Dickens recommended decanting this punch into a large stoneware jug and setting it next to a roaring fire so that it might be served very warm. While the charm of his presentation is uncontested, modern hosts might chose to keep their punch warm in a heavy pot over very low flame or on the low setting in a Crock-Pot. I’ve adapted the recipe here for conventional measurements and nominal fire safety considerations (tavern-keepers of the time often poured and tossed flaming cups of punch over distressingly long distances). Although Dickens’ recipe doesn’t call for spice elements and oranges, both were very common additions in the era. Avoid using spiced rums in this recipe; there’s more than enough intensity going on here without adding additional artificial flavors.

Procedure:
Day 1: With a vegetable peeler, remove zest from lemons with as little of the white pith as possible attached. Reserve the peeled lemons for day two. Drop all of the zest into a lidded glass jar and add sugar. With a blunt wooden spoon or cocktail muddler smash contents until the zest is bruised and completely coated in sugar. Place jar in a dark spot at room temperature; smash the zest/sugar every few hours if possible. Within 24 hours, you should have a syrupy but still grainy jar of citrus-oil sugar (historically called oleo saccharum).

Day 2: About one hour before serving, scoop all of the oleo saccharum mixture into the slow cooker basin or heavy pan. Add the rum and cognac, stir well to combine. Using a long matchstick, carefully set the surface of the lemon/booze mixture on fire (this will melt the sugar and extract more oil from the peel). After 4 minutes, place a well-fitting lid over the basin to snuff out the flame. Turn the slow cooker on low (or put pan over low heat). Add to the pot all of the fresh strained lemon juice from the reserved lemons and five cups very hot water. If desired, add orange slices and star anise pods. When serving, ladle into cups and grate a sprinkle of fresh nutmeg over the top; add a cinnamon stick for garnish. Makes about 8 cups of punch (just under 4 pints). 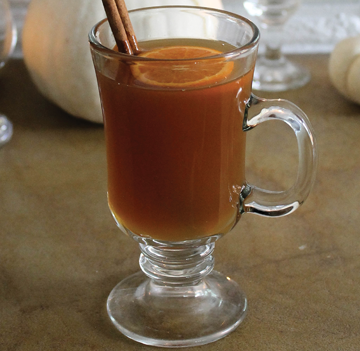 Although the term “milk punch” brings to mind creamy nogs and syllabubs, historically speaking it refers to the process of making a punch that’s both crystal clear and shelf-stable. Now often called “fat washing,” folks in 17th century Europe added milk to boozy citrus punches to mellow the stomach-achy acidic effects of all that lemon and lime juice. Very non-scientific short version: After clearing away the bubbly raft of gunk created when dairy fat from milk and citrus react and bind together, the resulting potion retains a full-bodied flavor with stunning clarity and a long shelf-life—a boon in the days before refrigeration.

Booze historian Wondrich notes that milk punches became so popular in the early 19th century that they were commercially bottled. He writes, “Queen Victoria so liked the version Nathaniel Whisson & Co. bottled that in 1838 she had them named ‘Purveyors of Milk Punch to Her Majesty.’” In Punch, Wondrich shares the oldest known milk punch on record (1711) from a British woman named Mary Rockett; her recipe made the equivalent of a dozen 750-milliliter bottles. Food scientist Dan Souza at America’s Test Kitchen converted Rockett’s recipe to modern measurements, added a bit of orange for balance and scaled it down to make a manageable one quart milk punch, which he describes as “bright and clean with limoncello-like lemon (and orange) intensity.”

Procedure:
Day 1: Combine brandy and the lemon/orange zest strips in a lidded container and let sit at room temperature for at least 18 hours. Discard zest strips.

Day 2: Place milk in a large measuring cup (at least 8-cup measure) or large pitcher; set aside. In a large bowl whisk together the infused brandy, water, sugar, lemon juice and orange juice until sugar dissolves. Pour brandy mixture into the container with the milk. Gently stir curds with a spoon. Cover and refrigerate for up to 24 hours.

Day 3: Line a fine-mesh strainer with a coffee filter or several layers of cheesecloth; set over a large measuring cup or bowl. Gently pour brandy-milk mixture through the strainer. Drain strained punch mixture through curds in coffee filter one more time. Discard curds and the coffee filter. Transfer clarified punch to a lidded glass container and refrigerate until ready to serve. To serve, pour about ¼ cup chilled punch into a small cordial glass.

Thumbing through vintage bar books, it’s readily apparent that most Punch recipes tipped the scales toward aggressive tippling rather than teetotaling. Such is not the case of Charles Baker’s compendium The Gentleman’s Companion: Vol. 2, The Exotic Drinking Book; Or, Around the World With Jigger, Beaker, and Flask (1939), wherein Baker notes that there are an abundance of occasions where festive alcohol-free libations should be graciously provided. Chronicling his worldly travels, Baker recounts a dozen punch recipes prepared sans booze, saying “There simply happen to be quite a few rational souls who don’t care for anything containing alcohol” including his own Quaker relatives and assorted children of his acquaintance (or at least in deference to their parents).

Baker collected this recipe from the files of C.H.B. Quennell, “a typical old-time English recipe from the country in and around Berkhamstead, Hertfordshire.” Fragrant, tart and refreshing with a gorgeous bright ruby color, this cranberry-based punch pairs beautifully with rich holiday foods. While Quennell’s recipe calls for a laborious process of cooking and straining cranberries for juice, bottled 100 percent cranberry juice (not sweetened cranberry cocktail) works great. For hosts in need of a slug of liquid courage in the face of family drama or when contemplating post soirée clean-up, it’s also delicious mixed with a generous glug of vodka or gin.

Procedure:
Day 1: Make festive ice blocks by adding cranberries, zest and wheels of citrus fruits to oversize ice cube trays, large ice-sphere molds or a bundt cake pan; use boiling or distilled water for clearer ice cubes. Freeze for 24 hours.
Add zest of 2 lemons (remove with a vegetable peeler, avoiding the white pith) to the cranberry juice. Reserve peeled lemons for use the next day. Refrigerate juice and lemons.

Day 2: Two to three hours before serving, juice and strain the 2 reserved lemons. To the bowl of cranberry juice, add the lemon juice, sugar, orange juice and 6 cups cold water. Stir well to dissolve sugar and refrigerate for an hour or more. Just before serving, add decorative ice blocks to a large punch bowl and pour the cranberry punch into the bowl along with the ginger beer. 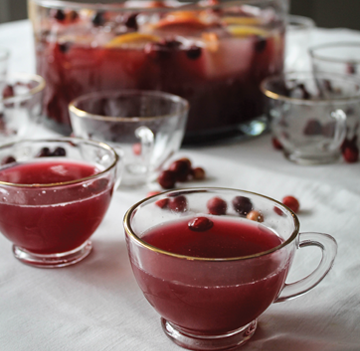