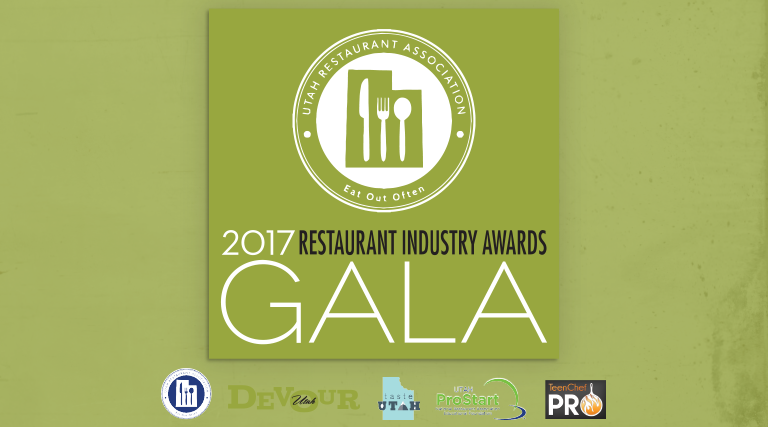 Restaurateur Awards are presented to outstanding owners and operators in the Utah restaurant industry with a reputation for building and growing the food community in our state. These are influencers at the highest level and participate and work for the betterment not only of their own individual businesses but the businesses and communities that surround them. We were humbled to honor these three restaurateurs. The coveted Silver Platter award honors an industry partner who supports and contributes to the overall growth of Utah restaurants.

Utah ProStart is one of the most well respected and premiere ProStart programs in the country. Under the tutelage of Melva Sine, what was a pilot program twenty years ago has blossomed into a dynamic curriculum based high school culinary education program that provides juniors and seniors with all the skills, training and certification they need to enter a career in the restaurant industry at a management level directly out of high school. Utah is the third fastest growing restaurant industry in the country and because of Utah ProStart the next generation of restaurant employee is trained, qualified and ready to take on the many job opportunities associated with this kind of growth. The Utah Restaurant Association’s Industry Awards Gala and ProStart Awards honor the many students who spent the year competing in regional and state culinary and management competitions. It honors the state champions, Provo High School for Management and Westlake High School for Culinary who went on to represent as Team Utah at the National ProStart Invitational. The awards also honor a ProStart Educator of The Year and Student of the Year. The Student of the Year is awarded a $10,000 culinary scholarship courtesy of Sysco Intermountain.
The awards ceremony also honors TeenChef Pro, the culinary education program based on ProStart, inspiring the next generation of ProStart student while providing an invaluable educational tool for currently enrolled ProStart students. The TeenChef Pro Awards honored the 12 TeenChefs along with their 3 MentorChefs Logen Crew, Ryker Brown and Justin Shifflett and host Michael McHenry, who all volunteered two weeks of their summer to participate in the culinary competition. The awards also honored Bintz, Sysco and Johnson & Wales University for their valuable sponsorship and contribution to season two of TeenChef Pro.

Restaurant Awards New Concept
The Utah Restaurant Association new concept awards recognize notable restaurateurs who contribute to the diversity of Utah’s culinary community. The culinary landscape in Utah is ever evolving and the New Restaurant Concept awards honor those restaurants who are masterfully carving their own unique niche. Beginning a new restaurant is a difficult venture, whether you are creating your own concept or investing in bringing a new franchise to the state. Introducing and maintaining new concepts is an incredible feat. These award winners are contributing immensely towards making Utah a dining destination from the inside out.