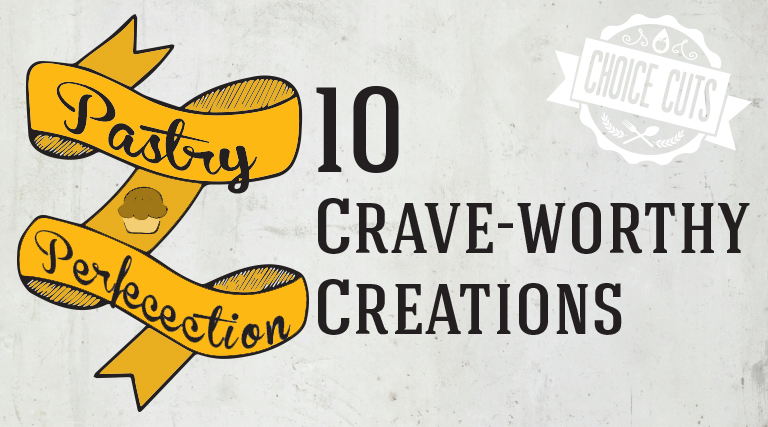 “Dessert can make or break a guest’s experience,” says pastry chef Natalie Keller, who has captained patisserie programs at some of Salt Lake City’s top restaurants. Keller believes that as the last course, desserts should make a positive final impression, and that, “It’s my job to make sure it’s an amazing one.” The field of pastry, especially in Utah, remains challenging and very competitive, with only a small number of highly coveted positions within the industry. And pastry chefs, like their savory colleagues in the high-pressure world of fine dining, constantly work to stay relevant and keep evolving with their craft.
Within their field, pastry chefs have earned notoriety for exactitude, something Handle/HSL Pastry Chef Alexa Norlin acknowledges with a grin and an eye roll as “a well-deserved OCD reputation.” Norlin describes the demanding and meticulous nature of their training, as it necessarily becomes second nature in their body of work. “Pastry school taught me a lot of technique, but also that there’s always room for improvement,” she says about her time at the prestigious French Pastry School in Chicago (which Keller also attended). “We learned from the best, and they had crazy-high expectations. If you had a dirty apron you were sent home.”
From independent enterprises under the direction of one creator (of which there are dozens in SLC alone) to chef de patisserie positions overseeing multiple locations and a dozen bakers, three qualities tend to make for stellar pastry professionals: consistency, creativity and mad food-chemistry skills. And in my time talking with so many of these off-the-charts talented culinary artists over the years, I’ve learned with great affection that even though they tend to take their craft to an almost-obsessive level of concentration, pastry chefs take themselves far less seriously. The many belly laughs I’ve shared with them over plates of pâté à choux and ramekins of gelato are totally worth the extra time on the treadmill and a growing stretchy-pants collection. As Natalie Keller says of her exacting work, “It’s the best compliment when someone says, it’s too pretty to eat.” All hail stretchy pants! 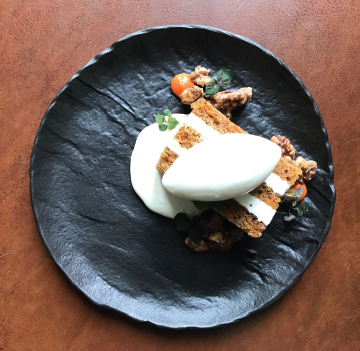 Carrot cake
HANDLE
As a lovely harbinger of all things spring, carrot cake gets a modern recalibration at the hands of award-winning pastry chef Alexa Norlin, who oversees desserts operations and myriad baked components for the original Handle in Park City, as well as chef/owner Briar Handly’s sister spot, HSL in Salt Lake City. In this case, it’s carrot cake on steroids: cake layers dense with flavor yet paradoxically light in texture banded with cream cheese mousse. It’s plated spectacularly with whipped mascarpone, candied walnuts and topped with a perfect quenelle of bay leaf ice cream. While they’re firmly recognizable as desserts, Norlin’s creative and boundary-pushing plates combine sweet elements minimally, letting the earthy and subtle flavors of the ingredients shine through. “I like to create recognizable aspects of comfort in the dessert course,” she says, “but it absolutely has to have beauty and creativity.” 136 Heber Ave., Park City, 435-602-1155, handleparkcity.com 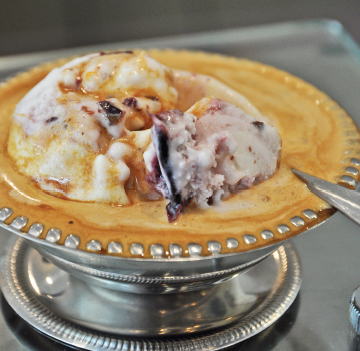 Stracciatella Affogato
Amour Café
The equivalent of a warm hug from the universe, a rainy-day lunch of local Beehive grilled cheese with Amour Spreads’ tomato jam (swoon) and a cup of steaming soup hits the spot. Rather than give into temptation and take a nap, there’s nothing like having the perfect afternoon pick-me-up of a stracciatella affogato: velvety chocolate chip gelato “drowned” Italian-style with a shot of espresso. It’s the perfect balance of cool sweet comfort with a serious jolt of caffeine to help get through the rest of the day. Pastry Chef Amber Billingsley changes up the local Solstice chocolate stracciatella offering every week—think malted milk, High West whiskey, salted caramel or double chocolate—but they’re all beyond suited for the full affogato treatment. Billingsley has built a solid reputation on her bounteous gelato repertoire, with a legacy of awards earned at top pastry shops and restaurants like Vinto and 3 Cups. “I just love the blank slate to play with making gelato,” she says. “The possibilities are endless.” Bonus: Pints of packed gelato are available to go. 1329 S. 500 East, SLC, 888-554-6845, amourslc.com

Fresh Rhubarb Crumble
Tupelo
“I love to feed people,” Tupelo Pastry Chef Shirley Butler says. “It’s something that I’ve wanted to do since I was young.” On the old AGA range in her family’s English countryside farmhouse kitchen, Butler experimented alongside her mother—an avid baker—and father, who took her into their extensive gardens to harvest and into the fields to hunt rabbit and fowl. At Tupelo, Butler’s creations bring her lifetime of exploring flavors and techniques while traveling the world (she’s a former private chef and nanny) to the plate in ways that are instantly recognizable—custards, tarts, biscuits and puddings—but with sophisticated flavor combinations and elegant presentations. Like bright-tart rhubarb with its distinctive ruby hue slightly melting against a mellow Caledonian Scottish oatmeal ice cream. Butler’s sky-high mini biscuits (which she spends almost three hours each day mixing by hand) are a must-order treat at Tupelo, along with anything she makes using chocolate. In the works are equally spectacular savory treats, like delicate black-pepper macarons sandwiched with foie gras and cherry jam. 508 Main, Park City, 435-615-7700, tupeloparkcity.com 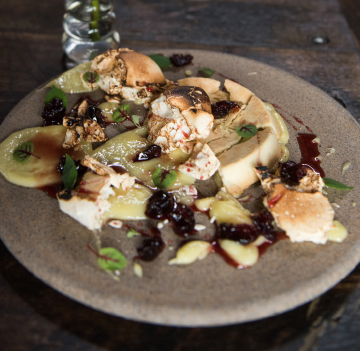 When Life Gives You Lemons …
Pallet Bistro
The dessert menu at Pallet constantly changes, not only with the seasons, but also with what Chef Buzz Willey and Pastry Chef Courtney McDowell have sourced from their local growers that day. “We love seeing what piques our interest with each delivery,” McDowell says. “Finding something that seems weird and interesting to me and figuring out how to make the ingredients shine is the best part of my job.” Her plates are known for being in equal parts visually stunning and drop-dead delicious, with lots of bright citrus elements and reduced fruit vinegars. She crafts a light touch on the sweet spectrum with hints of herbal notes and a bit of savory sass. The flavors are rustic and comfortable with a contemporary twist, like the deconstructed lemon tart with crumbled meringue and edible flowers. Her current series of plates are all plays on food idioms, with serious pastry technique and quality ingredients presented in whimsical ways. “Dessert should be fun,” she says. “I want people to love the food and also have a good laugh.” 237 S. 400 West, SLC, 801-935-4431, eatpallet.com 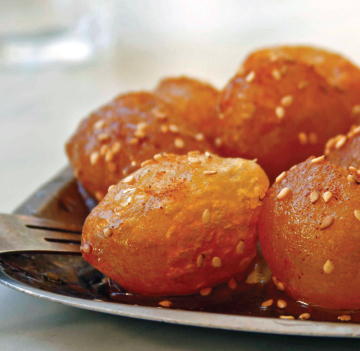 Loukoumathes
Manoli’s
Fresh, innovative and decidedly modern spins on Greek classics have made Manoli’s a stand-out in SLC’s culinary scene. Pastry Chef Katrina Cutrubus attributes her own decidedly cosmopolitan and lighter take on Greek desserts to her time experiencing the pastries of Europe first-hand, with a particular love for Spanish influences and the bright flavors of the Mediterranean. Cutrubus’ loukoumathes are elegant and satisfying: pillowy traditional Greek donuts with a slight citrusy edge, served with spiced honey and sesame seeds. When it’s on the menu, don’t miss her decidedly Greek riff on cheesecake—a tangy yet light goat cheese pastry drizzled with completely addictive black-pepper honey. 402 E. 900 South, SLC, 801-532-3760, manolison9th.com

Old Town Trio
Firewood
Pastry Chef Aimee Altizer calls this creation, “all the best of Park City ingredients, all in one dessert.” The rich chocolate torte—made with Park City-based Ritual Mid-Mountain chocolate—gets a subtle hint from Utah’s High West Rendezvous Rye. At Firewood, each dish has an additional bit of flavorful depth from elements cooked on the massive wood-burning grills in the kitchen, which Altizer uses to impart a delicate smokiness to her Pink Elephant Coffee roasted-beet gelato and shaved beet petal. As the seasons change, Altizer and Chef John Murcko look forward to incorporating wood-fired Utah stone fruits like peach, plum and raspberry with their gently smoked housemade ricotta and pound cake. It’s a feast for all the senses. 306 Main, Park City, 435-252-9900, firewoodonmain.com

Black Pepper & Tequila Cherry Ice Cream
PJK’s Creamery
Although Pastry Chef Peter Korth is coming up on 50 unique flavors he’s developed as owner of PJK’s Creamery, his black pepper ice cream studded with tequila-pickled cherries remains arguably the most famous in his repertoire. While pastry chef at Frida Bistro, this sweet-savory concoction won national attention when the Cooking Channel featured it in an “Ice Cream Nation” special. Since then, Korth, along with his partner in business and life, Mike Thomas, have wowed farmers market patrons with their seasonal selections of traditional old-fashioned hard-pack ice cream and sorbets in modern flavors like La Barba coffee with a fig-caramel swirl, calamansi (a citrus from Southeast Asia) sorbet with lime and orange zest, Utah peach with High West whiskey-toffee swirl, Mexican hot chocolate, salty-sweet buttered popcorn, and crunchy rainbow-hued breakfast cereal. pjkscreamery.com 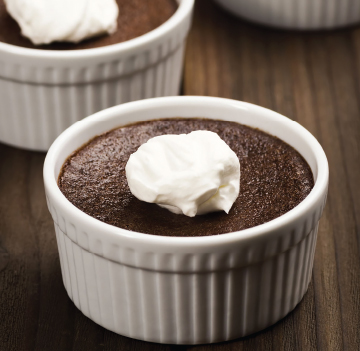 Chocolate-Chile
Pot de Crème
Hell’s Backbone Grill
Now in their 18th season operating in remote Boulder, Utah, near Grand-Staircase Escalante National Monument, Hell’s Backbone Grill chef/owners Jen Castle and Blake Spalding keep some dishes on their roster for nostalgic reasons. In the case of the chocolate-chile cream pots, there’s the probable devastation of scores of devoted customers if the item were ever to leave their menu. The timeless French classic pot de crème gets the HBG special treatment with silky dark chocolate and a little zip from Chimayo chile powder grown and processed each harvest at the restaurant’s nearby farm. It’s absolutely worth the trip to Boulder to try one. (Or three—no judging here.) For those in need of the chocolate-chile fix during HBG’s winter off-season, the recipe can be found in their first cookbook, With a Measure of Grace. No. 20 North Highway 12, Boulder, 435-335-7464, hellsbackbonegrill.com

Raspberry Cream Pie
Left Fork Grill
You can trust that the pastry will be top notch when booths in the diner have a built-in “pie shelf” for a reminder that there’s always room left for dessert. When only a slice of pie like Grandma made will do—if your grandma, like mine, insisted on using chilled lard in the crust to achieve those perfectly crisp flaky layers—Left Fork Grill has you covered. Their menu board features an ever-changing selection of seasonal cream and fresh-fruit pies made daily, all featuring that magnificent crust. Unlike many traditional diner pies, though, Left Fork Grill’s are never overly cloying or sweet, with flavors like fresh citrus, zingy raspberry or toasted coconut. Devour photographer and Salt Tooth food blogger Caroline Hargraves says, “Their raspberry cream pie basically gives me IRL (in real life) heart eyes” like the ubiquitous emoji. We totally agree. 68 W. 3900 South, SLC, 801-266-4322, leftforkgrill.ipower.com 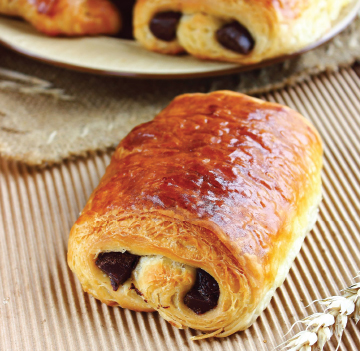 Pain au Chocolat
Gourmandise
Ten-thirty on a Saturday night in the Gourmandise dining room feels like being swept across the Atlantic and seamlessly deposited in a café in Paris, Berlin or Rome. Almost every chair is filled, the softly lit room cozy with the lyricism of a half-dozen world languages and clatter of espresso cups. Multi-generational families cheerfully cram around pushed-together tables, content babies snuggled up on their grandfather’s shoulders and guests clink wine glasses with an exuberant “cin cin” or “salud” cheers. While we are fortunate in this salty city to have dozens of truly superb pastry shops, Gourmandise is the bustling spot to wind down a post-theater dessert date while simultaneously picking up a stellar breakfast for the next morning. With a selection as impeccable in its quality as its almost anxiety-inducing quantity of choices, standing at the pastry counter is a delicious win-win dilemma every time. 250 S. 300 East, SLC, 801-328-3330, gourmandisethebakery.com