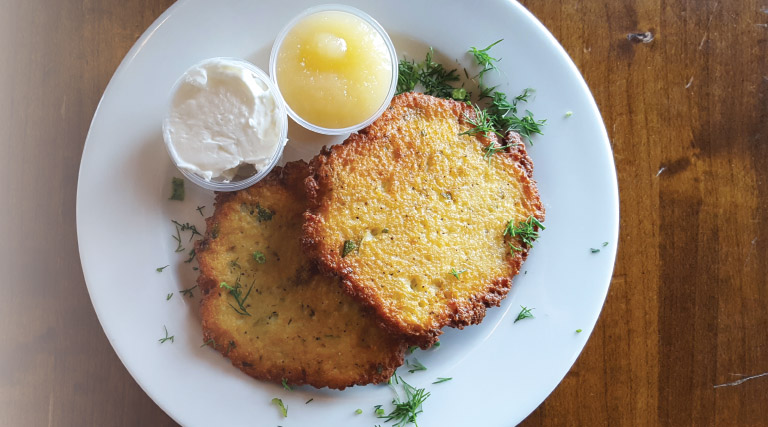 An ode to the humble potato

Is there any food as versatile as the potato? Tucked into doughnuts, mashed into pillowy mounds, fried into crisp discs—the potato offers itself as a building block in the creation of myriad dishes. Its subtle nature presents a canvas for chefs to paint with flavors. A staple of diets from Peru to Scotland, the potato also plays a part in St. Patrick’s Day, when Irish-Americans carry out a longstanding tradition of potato planting. There’s no better time than March 17 to revel in potato power, and we’ve found the perfect places to do so.

Potato Pancakes
Every day is Hanukkah at Feldman’s Deli, where potato pancakes have held tenure on the menu from Day 1. But these aren’t your typical latkes. Janet Feldman, who owns Feldman’s with her husband, Michael, applies the recipe and instruction of her Polish grandmother. She starts by finely grating—not shredding—Idaho Russets, adding a little bit of sour cream as she grates to keep the potatoes from oxidizing. Draining the potatoes helps to remove excess starch and water that would make for soggy latkes. Then Janet adds in grated onion, garlic, seasoning, eggs and a little flour, and forms the mixture into patties. The key to maximum crispiness? Pan-frying the pancakes to order, before serving with the requisite accompaniments: sour cream and applesauce. For more in the tuber department here, try the knish—a pastry filled with potato and onion that’s perfect for on-the-go eating. 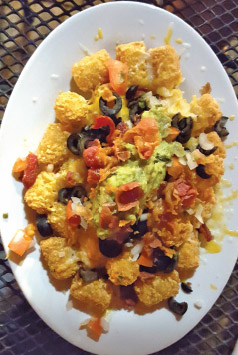 At last, tater tots have graduated from their stints in school cafeterias and the movie Napoleon Dynamite to reach their full crispy potential. It all started with a bartender who had an experience with tater tot nachos and recreated and revamped them in the Campfire Lounge kitchen. But the Tot-chos—layered with cheese, salsa, guacamole, sour cream, olives and bacon—are just the beginning. Chef Jacob Seiger’s personal favorite is the Buffa-tots, which are also vegetarian. Seiger gives tots the same treatment as his wings, tossing them in Buffalo sauce that can be made mild, medium or hot. He also serves chili cheese tots and Tot-zzas, topped with marinara, sausage and provolone. Or, go back to the basics with an order of plain tots and marvel at the malleability of the potato with a cold Hefeweizen in hand. 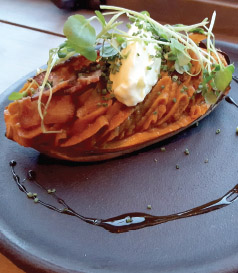 Twice Baked Sweet Potato
This potato creation gracefully toes the line between savory and sweet. Given Tupelo chef/owner Matt Harris’ Georgia roots, you can bet he knows how to handle the spud of the South. He starts by roasting a sweet potato to caramelize the sugars, then cools it to room temperature before pushing it through a sieve. What happens next gives Tupelo’s potato its charisma: Harris stirs in a touch of maple syrup and a spat of his housemade kimchee butter for acidity, a little heat and spunk. On top of the whole creation goes candied bacon and more kimchee butter. Whether you enjoy this ocher work of art as an appetizer, side or—dare we say—dessert, don’t eat at Tupelo without trying it. 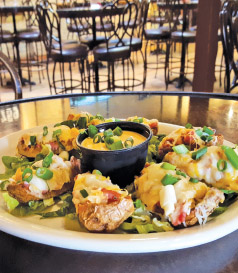 Reuben Potato Skins
You’ll find all the classic potato renditions at this Irish pub—Fish and Chips, Bangers and Mash, Shepherd’s Pie and such. But Piper Down also breaks with tradition. Case in point: the Reuben potato skins, a creation as sassy as the origins of this pub’s name. Initially, the owner had wanted to name the place Temple Bar after the famous district in Dublin, but got pushback from the LDS Church. In response to one vocal female detractor, he morphed “pipe her down” into Piper Down and thus the pub—and the Reuben potato skins—were born. The chef layers Idaho russets with cheddar and Swiss, corned beef, sauerkraut and housemade Thousand Island dressing. Piper Down recently added a vegan version of its loaded skins to its array of meat-free fare. Sadly, you won’t be able to experience the glory of either of these spud specialties on St. Patrick’s Day itself, when Piper Down welcomes hundreds through its doors and serves a limited menu. Any other day, however, is fair game to say sláinte over loaded spuds and a Guinness. 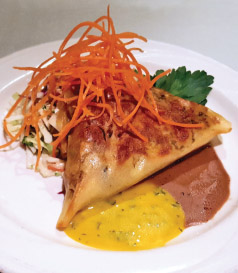 Samosas
Tuck vegetable curry into delicate dough, fry it to a crisp, and you have yourself a samosa. This fried wonton of Indian cuisine is a must-try vegetarian appetizer on Good Karma’s menu. And what gives the filling its tender consistency? Potato, of course! Chef Houman Gohary mashes potato and suffuses it with curry flavor, then mixes in mushrooms, spinach and peas. The tasty triangle comes with cabbage slaw, shredded carrot and an addictive mango sauce that will inspire you to pair the potato with condiments beyond the standard ketchup. 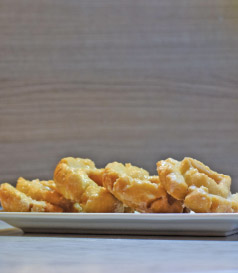 Spudnuts
We’d be remiss to pen an ode to the potato without including a certain baked good. Before the current craze surrounding cupcakes and cronuts, Americans fell hard for the spudnut. This potato flour doughnut got its start right here in Salt Lake City when the Pelton brothers, inspired by potato doughnuts they’d sampled in Germany, opened up the first spudnut shop in 1940. Fast forward to 2014 when Johnny Booth—after years of research—managed to obtain the original Pelton recipe and bring the beloved spudnut back to Utah. The potato doughnut, made with Idaho potato flour and 39 spices, has made quite a splash in Logan. Because of its lighter texture, the pastry clocks in at only 110 calories. Baby Boomers and members of the Silent Generation flock to the shop to fulfill nostalgic cravings. Four women even road-tripped all the way from San Diego in their longtime quest to find an authentic spudnut. “They got some hot ones and two of them started crying,” Booth recalls. For the uninitiated, start simple with a warm Original Spudnut before graduating to fancier maple and chocolate flavors.