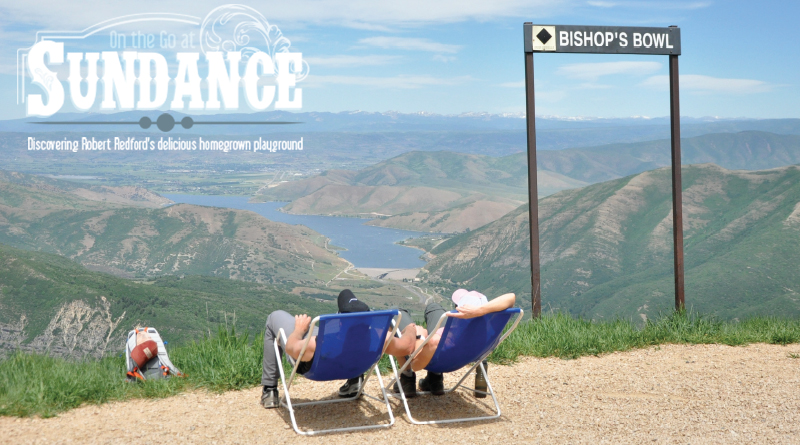 Actor, environmentalist and Sundance Mountain Resort founder Robert Redford says, “Well, I guess it all started with a simple ride over 50 years ago.” He’d taken a drive through what was then “tiny” Provo Canyon, saw the majestic Mount Timpanogos, and knew immediately that “This was where I wanted to put a stake in the ground.” He continues, “Two years later, when I could afford it, I bought two acres of land for $500.” Foreseeing that in a few years the pristine area that is now Sundance would be “developed away,” Redford decided to do everything in his power to preserve it. “And I guess that was the birth of Sundance Mountain Resort,” he says.

Provo Canyon isn’t so tiny anymore, but it’s still easy to forget that Sundance—and the marvelous art, culture, music, activities, food and drink that it offers—is so accessible to most Utahns. And once you’re there, you’ll notice that time seems to slow down. No one appears to be in a rush, and it’s the perfect locale to take things down a notch and catch your breath. The resort and its employees manage to combine top-notch, world-class professionalism with a relaxing, friendly style—not a mix that’s easy to achieve. The dining and drink venues at Sundance in particular—under the watchful eye of Steve Solomon, director of food and beverage—are not just among Utah’s most coveted, but I think some of the best in the West.

Sundance’s flagship fine dining restaurant has, since its inception, been The Tree Room. If you’ve never heard the genesis story, it goes like this: The Tree Room was thusly named because in 1970 when it was built, founder Robert Redford, who is nothing if not environmentally conscious, chose to build his restaurant around an existing 65-foot pine tree rather than to cut it down. The restaurant and the tree are still going strong.

First-time visitors to the Tree Room should allot some time to wander the restaurant and take in the Native American art and Western memorabilia that is on display from Redford’s personal collection. Then sit back, chill and enjoy one hell of an evening. No one will rush you should you decide to linger over just one more glass of wine or an after-dinner drink as your dinner winds to a close.

How you choose to “do” Sundance is your business; there’s a multitude of options at your command. But a day at Sundance might go something like this: You awake refreshed and enveloped in the luxury linens at one of the resort’s Mountain Suites, just a short walk from the base of Sundance village, but far enough away to be isolated and serene. The suites feature full kitchens, flatware, silverware and such, so you might want to just enjoy breakfast “at home” on your sunny deck.

However, if it’s a Sunday, you’ll want to wander down to the Foundry Grill for the opulent Sunday Brunch. Opened in 1996, the Foundry Grill is named for the large foundry wall located in the main dining room. One of the affable servers will walk you through the various buffet brunch stations—from the salad and omelet/carving stations through the massive array of desserts—encouraging you to take your time and enjoy everything.

I started Sunday brunch recently with chilled shrimp and local artisan cheeses before moving on to the the restaurant’s yummy poached eggs on steak hash. Curried chicken with basmati rice was delicate and delicious, as I worked my way toward the carving station’s roasted lamb and prime rib. All the while, drinks (coffee, tea, juice, milk and soft drinks are complimentary) were regularly refilled and used plates efficiently bussed. Other can’t-miss Foundry Grill brunch options include the divine French toast, smoked trout, spinach salad, smoked salmon and, of course, the notable desserts like killer chocolate cake, banana-chocolate bread pudding, homemade cookies, tarts and many more.

In warm weather, you’ll be able to burn off a few of those brunch calories with hiking or mountain biking on Sundance’s many trails. Your adventure can be as strenuous (or not) as you’d like, with lift-served biking and hiking. Suggested hikes range from a beginner’s cruise called the Mandan Short Loop of one mile—accomplished in about 40 minutes—to the intermediate/advanced Arrowhead Summit Trail hike of 3.7 miles, which typically takes 3-4 hours. Fly fishing, horseback riding, river rafting, golfing and the exhilarating ZipTour are also available to the adventuresome visitors. The ZipTour features a breathtaking 2,100 feet of vertical drop while speeding along at more than 65 miles per hour, at heights that made me a little queasy just watching it from the ground.

For lunch, the aforementioned Foundry Grill is always a solid option. And so is the Sundance Deli, which offers made-to-order sandwiches, salads, baked goods, snacks, signature smoothies, coffee drinks and more. It’s the perfect place to load up on goodies for an afternoon hike or a picnic. Another terrific lunch spot—one with spectacular 360-degree views of Heber and Utah valleys and the surrounding Wasatch Mountains—is Bearclaw Cabin, located at the top of the Arrowhead chairlift. Enjoy the sunny Cabin deck and its incomparable views while you nosh on chips and salsa, wraps, gourmet sandwiches, salads, beef barbacoa and the like.

Adults will want to be sure to include a stop at the Owl Bar during their visit. The cozy, timber-rich watering hole features local and national musical talent on weekends, including Utah’s own Joy & Eric, Jake Dreier and others. The bar itself is a restored 1890s bar that Redford had moved from Thermopolis, Wyo., to Sundance, and the original rosewood bar was said to be frequented by Butch Cassidy’s Hole in the Wall Gang.

Try to make time to take in some of Sundance’s many summer arts and culture activities such as the Summer Theatre’s 2016 production of The Music Man, which will begin, for those who’d like to partake, with a pre-show barbecue outdoors. Budding artists will want to visit the Sundance Art Studios, where public, two-hour, single-session workshops include jewelry making, wheel-thrown pottery, watercolor, acrylic or oil painting, printmaking, photography or drawing. Each is tailored to every individual’s ability level from beginner to experienced and include expert instruction and materials.

Of course, no visit to Sundance is complete without indulging in a dinner at The Tree Room. I’ve felt over the decades that the cuisine there has often varied from good to great, depending on who’s been heading up the kitchen. Right now, under the supervision of Resort Executive Chef David Mullen, it’s hitting very high notes. He is ably assisted by a talented team that includes Senior Restaurant Manager Jonny Losee, Executive Sous Chef Eric Miller, Resort Pastry Chef Ashleigh Dougherty and Sous Chef Ashley Parkins.

Highlights of a recent Tree Room dinner included remarkably tender grilled octopus tossed with tiny white beans, piquillo peppers, migas (Mexican-style croutons) and chimichurri. Just as delicate and lovely was sushi-grade diced hamachi served with a hollowed-out and sliced avocado, with grapefruit, fried rice and fresh basil. My son, Hank, was willing (barely) to share his Tree Room starter of grilled asparagus and morels with a poached egg, parmesan cracker and Madeira veal jus with me and I’m glad he did. It’s a wonderful appetizer or shared dish and one that pairs beautifully with Honig-Sundance Napa Sauvignon Blanc—part of the Sundance Wine as Art series.

Another excellent wine pairing suggested by a Sundance server was Bucklin Sonoma Zinfandel and tender, juicy elk loin with an array of seasonal mushrooms, red cabbage, Brussels sprouts and tart blackberry-pomegranate mostarda. If that sounds like a dish better enjoyed in winter, opt for the summery Moroccan-spiced airline chicken breast with pearl couscous, colorful heirloom carrots and natural chicken jus in warmer weather.

Keep an eye out, too, for monthly Bearclaw Supper Club dinners during summer, held at the mountaintop Bearclaw Cabin. And for wine lovers, there is the Sundance Wine as Art program to explore, in which the resort partners with distinctive American vintners “who exemplify an aspect of the Sundance values and mission, including the commitment to environment, the celebration of independent voice, spirit and creativity.”

“Other resorts have had more money than I did to build bigger things,” said Redford. “But there was a human quality that was missing … a love of the land … a feeling of the land. If you put a root deep enough in the ground, what blossoms will inspire others to come. What we offer in the form of art and culture, spirit and service, is homegrown and available to all.” ❖