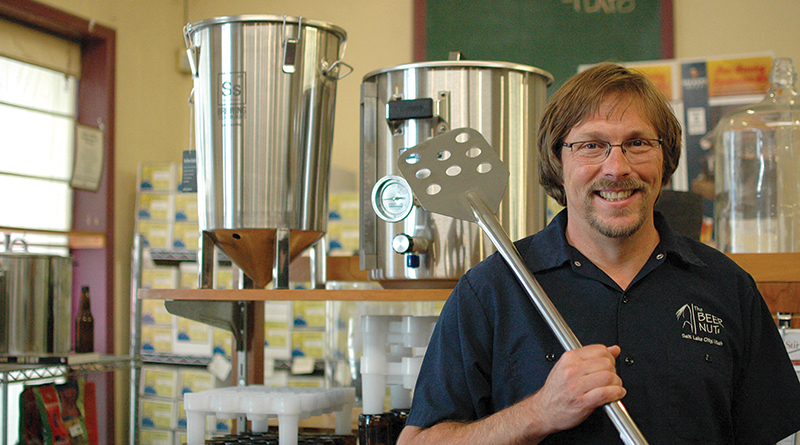 Humans have been brewing beer for thousands of years. Some say brewing may even predate breadmaking. During the Middle Ages, beer became an important staple, as people began to live in cities where close quarters and poor sanitation made clean water difficult to find. The alcohol in beer made beer safer to drink than water. Thus, beer became a necessity rather than the luxury it is today.

To get to know beer, you need to understand the processes of how it’s made. Mark Alston, owner of the Beer Nut homebrewing and winemaking supply shop, has spent the better part of two decades getting people to know their beer.

Devour: How did you come across homebrewing?

Mark Alston: I started homebrewing back in 1989. My girlfriend at the time bought me a basic kit. She knew I was a “sciency” guy and it combined all the things I loved, like chemistry, cooking, gadgets—all that cool stuff.

D: Did homebrewing change your perceptions of the beer you were drinking at the time?

MA: Immensely. For the most part, beer available at that time was uninteresting, fizzy yellow stuff that really didn’t offer up much in the way of excitement. Homebrewing gave me the chance to explore beer styles I’d heard of, but never had the chance to try.

D: How did the transition happen from homebrewer to homebrew-shop owner?

MA: Back then, there were only a few homebrew shops around and they provided the basics—which was adequate for a time. I started reading about all of these cool beer styles that I wanted to make, but nobody in town had the stuff I needed, so I said to myself, “I can do better than this.” I found a space, got the inventory and have been in business in the same place for the past 21 years.

D: How were things in the early days?

MA: It was tough and business was slow. I had all my money tied up in inventory and had no employees. I think I worked 246 days in a row that first year before I took my first day off. My wife covered for me while I spent that day-off homebrewing at our home. Don’t laugh—I never had time to brew!

D: What’s changed in homebrewing over the past 21 years?

MA: The ingredients are so much better. We have at least three dozen different types of grain, not to mention 50-plus different varieties of hops. Plus the wine kits and incredible brewing gadgets that are out now.

D: How is the technology different?

MA: The equipment we sell now can easily duplicate the technology that exists in professional breweries—everything from kettles, fermenters, pumps and lab equipment. Everything you need to make a perfect professional-tasting beer is available. I’d have killed to have some of this stuff when I first started brewing.

D: Now that you can make perfect-tasting beer at home, what’s next in homebrewing?

MA: That is really up to the homebrewer’s imagination. There are so many talented and creative people who are constantly changing centuries-old perceptions of what beer can be. It’s a really inspiring time to be homebrewing. “Give a man a beer, he’ll waste an afternoon. Teach a man to brew, he’ll waste a lifetime.” ?